Here are our favorite Mutual Funds Investment Portfolios for July 2014.

There are no changes to our Insightful Asset Allocation targets for this quarter, but we have made some adjustments to a few of our model portfolios including our Fidelity Investments Model Portfolio, our Fidelity NTF Portfolio, and our ETF and Mutual Fund Portfolio. We have also made several changes to the Mutual Funds we are using in some of our model portfolios. In some cases this was due to fund closings while in other cases it was because funds were no longer available at multiple brokerages.

We are making several changes to our Mutual Fund list with Fidelity Strategic Real Return (FSRRX) replacing Fidelity Inflation-Protected Bond (FINPX) because it is a more diversified approach to inflation protection. Baird MidCap (BMDSX) is replacing Neuberger Berman Genesis (NBGNX) which has too many small cap stocks in its portfolio to really be considered a Mid Cap fund. 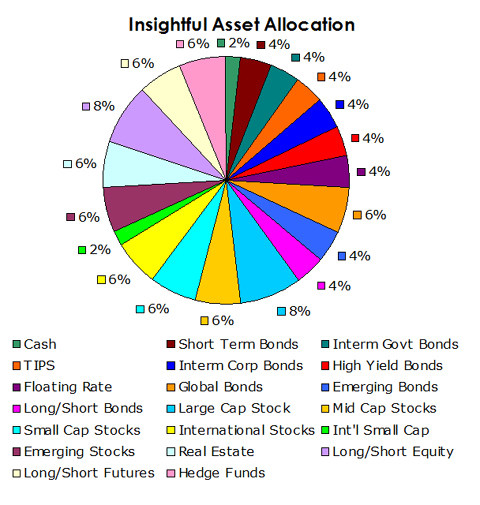 After a banner year for stocks in 2013, the talking heads on CNBC have not reached a consensus on which direction the financial markets are headed. As a result, the numbers for the first half of 2014 look pretty normal as stocks are up 6.9% and bonds up gained 3.9%. While it paid better to be a value investor because you would have made 8% vs. the 6% growth investors made so far this year, the real winners were invested in Mid Cap Value stocks which got almost whole year’s worth of returns in half the time with an 11.1% return. International stocks have had a fairly normal start to the year too, gaining 5.8%, while Emerging Market equities are finally heading in the right direction after adding 6.3%.

The big surprise in the first half of 2014 was the fact that interest rates actually fell, helping long term Treasury Bonds gain 12.1%. In turn, lower interest rates proved to be a nice boost to REITs, which have been the big winner so far in 2014 with a gain of 17.7%. 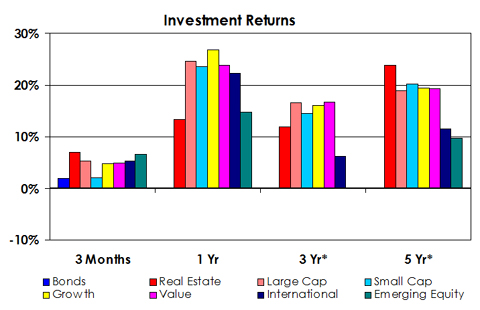 Investment Returns as of June 2014

The rebound in Emerging Markets was included the bond marekt with Fidelity New Markets Income (FNMIX) leading the way with a gain of 10.4% in the first half of 2014. More strong performers were Loomis Sayles Core Plus Bond (NERYX) which gained 6.8%, Fidelity Inflation-Protected Bond (FINPX) which added 5.7%, Dreyfus International Bond (DIBAX) which was up 5.4% and Fidelity High Income (SPHIX) which returned 4.3%.

AMG SouthernSun Small Cap (SSSFX) topped our equity funds with a gain of 11.3%, followed by American Century Mid Cap Value (ACMVX) which picked up 10.2% and FMI Large Cap (FMIHX) which added 8.4%. Overseas, Lazard Emerging Markets Equity (LZOEX) recovered the most so far this year with a gain of 9.1%, while Harding Loevner International Small Company (HLMSX) with a gain of 6.9% and Matthews Asia Dividend (MAPIX) with a gain of 5.3% were also strong performers.

The real winners so far in 2014 have been specialized funds with Fidelity Real Estate Investment (FRESX) leading the way with a 17.4% gain and Oppenheimer SteelPath MLP Alpha (MLPAX) picking up 14.9%.

Returns for the first half were fairly similar for ETFs. PowerShares Emerging Markets Sovereign Debt (PCY) was our leading Bond ETF with a gain of 10.5%, followed by SPDR DB International Govt Inflation-Protected Bond (WIP) with a gain of 7.4% and SPDR Barclays High Yield Bond (JNK) which picked up 5.4%.

WisdomTree MidCap Dividend (DON) with a gain of 10.7% was our leading US stock ETF, followed by Guggenheim S&P 500 Equal Weight (RSP) which added 8.5% and iShares S&P SmallCap 600 Value Index (IJS) which returned 4.5%. Overseas iShares MSCI Canada Index (EWC) was the leading developed country ETF with a gain of 11.3% while iShares MSCI Brazil Index (EWZ) may have received a boost from hosting the World Cup to gain 9.1% so far in 2014.

There was quite a contrast at the sector level of the market as SPDR S&P Biotech (XBI) gained 19.0% and Utilities Select Sector SPDR (XLU) rose 18.5%. On the other had SPDR S&P Retail (XRT) actually lost 1.0% in the first half of the year.