You are here: Home » Archives for Mutual Funds

If you only looked at the numbers you might think that 2014 was a fairly normal year as US stocks gained 12.6% while the US bond market added 6%. It is the path the markets took to get there that has investors on edge going into the new year. REITs and Long Treasury Bonds were the big winners for the year with the former up 30.3% and the latter gaining 25.1%. On the other end of the spectrum, International stocks fell (3.9%) as falling oil prices really took a toll on Emerging Market stocks, in particular for countries in Latin America.

Volatility in the financial markets has picked up, but last quarter’s action has just taken it back up to normal levels. Slower growth in emerging markets, almost no growth in Europe, and a significant over supply of oil contributed to a 14% gain for the US dollar in the second half of the year. Another factor adding to the dollar’s rise is the fact that rates are actually higher in the US than in most developed countries, which has driven foreign investors to invest in the US for higher yields, pushing bonds up and interest rates even lower. While lower oil prices are good for the consumer, the speed and depth of oils fall could put a significant dent in the improving US job market. It is with this backdrop that investors are cautious heading into 2015. 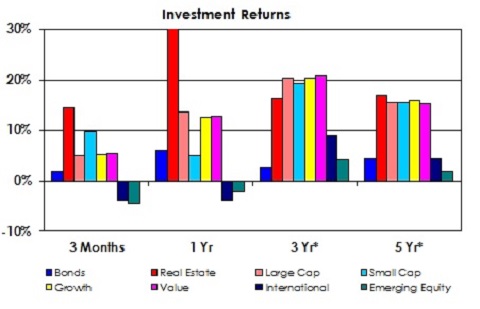 Investment Returns as of December 2014

Our strongest Bond fund for the 4th quarter and 2014 was PIMCO Foreign Bond (USD-Hedged) (PFODX) which gained 3.1% for the quarter and 10.6% for the year thank for the most part to its hedge against the rising dollar. Metropolitan West Total Return Bond (MWTRX) picked up 1.5% for the quarter and 5.8% for the year, without a tailwind from the dollar. Fidelity New Markets Income (FNMIX) was our worst bond fund performer with a drop of (3.3%) this quarter, but it still managed to pick up 4.3% for 2014. Our only Bond fund in the red for 2014 was American Century Short Duration Inflation Protected Bond (APOIX) as the sharp drop in oil prices put a damper on inflation expectations, pulling the fund down (1.7%) for the year, all of which occurred in the 4th quarter.

Our top stock mutual funds in 2014 were RidgeWorth Large Cap Value Equity (STVTX) and Parnassus Mid-Cap (PARMX) which gained 11.1% and 11.3% respectively. Small cap stocks rebounded nicely in the 4th quarter with Fidelity Small Cap Discovery (FSCRX) adding 10.6% to finish the year with a 7.0% gain. Our best International mutual fund was Driehaus Emerging Markets Small Cap (DRESX) which lost just (2.0%) for the quarter, pulling down its return for the year to 5.8%. The big mutual fund winner was Fidelity Real Estate Investment (FRESX) which gained 13.8% for the quarter and 30.1% for the year. After a few years of waiting, keeping some money in Managed Futures finally paid off with Credit Suisse Managed Futures Strategy (CSAAX) leading the way with an 11.6% gain for the year. On the other hand, the biggest loser this quarter was Eagle MLP Strategy (EGLAX) which fell (14.2%) along with oil prices while still managing to hold on to a 3.8% gain for the year. This should set up a good buying opportunity as lower cost oil should not have a significant impact on these companies that deliver oil and gas.

Going into 2014 most investors were betting on rising interest rates, so the fact that iShares Barclays 20+ Year Treasury Bond ETF (TLT) gained 27.3% for the year was a big surprise to many. PowerShares Emerging Markets Sovereign Debt (PCY) finished much closer to expectations with a gain of 9.2%. A strong Technology sector helped PowerShares Nasdaq 100 (QQQ) to its 19.2% return in 2014 while WisdomTree MidCap Dividend (DON) had a nice 15.3% gain for the year. iShares S&P SmallCap 600 Value Index (IJS) rebounded nicely in the 4th quarter with a gain of 10.4%.

The dollar’s rise against the Euro hurt the German market more than any other developed nation’s stocks as iShares MSCI Germany Index (EWG) dropped (12.0%) in 2014. The falling price of oil hurt iShares MSCI Brazil Index (EWZ) even more as it fell (15.5%) this year. On the other hand, in spite of slowing growth in China, iShares FTSE China 25 Index Fund (FXI) gained 11.4%. The real extremes in 2014 were seen in sector ETFs as SPDR S&P Biotech (XBI) gained 45% while PowerShares DB Energy (DBE) lost an amazing (40.1%) in 2014.

Here are our favorite Mutual Funds Investment Portfolios for October 2014.

Stocks were down (2.1%) in September to end the 3rd Quarter of 2014 flat. Size mattered this time around with Large Cap Stocks up 1.1% while small cap stocks lost (7.4%). A strong dollar and a weak economy in Europe did not help international stocks either as they fell (5.3%). There was no place to hide this month as bonds were down (0.7%) to finish the quarter up only 0.2%. 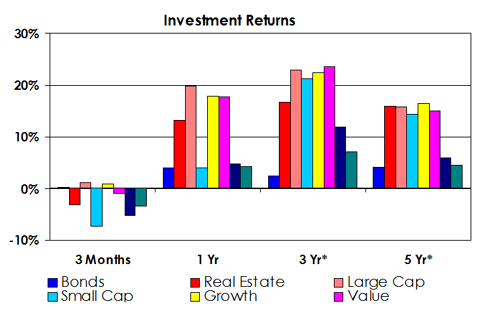 Investment Returns as of September 2014

Our patience with Managed Futures looks like it is finally starting to pay off as it appears this category bottomed out back in August. Aspen Managed Futures Strategy (MFBPX) was our top fund the third quarter with a gain of 7.4%. Next in line was PIMCO Foreign Bond (USD-Hedged) (PFODX) which gained 2.5%. This fund performed well because it is hedged against the dollar so it does not fall when the dollar rises. While bond funds did not do much this quarter, most actively managed funds lost a little ground. Two that bucked the trend were Metropolitan West Total Return Bond (MWTRX) and Metropolitan West Unconstrained Bond (MWCRX) which both ticked up 0.3%.

Fidelity Contrafund (FCNTX) was one of only a few equity funds to turn in positive results with a gain of 1.8% while Wasatch Frontier Emerging Small Countries (WAFMX) added 0.9%. This least of the losers in the equity category were American Century Mid Cap Value (ACMVX) with a loss of (0.9%), Matthews Asia Dividend (MAPIX) which fell (2.1%) and Hodges Small Cap (HDPSX) which lost (4.7%).

As signs of a weak global economy circulated in the news, gains from a strong US dollar were captured by the PowerShares DB US Dollar Index Bullish (UUP) which picked up 7.6% this quarter. This bad news for commodities, in particular precious metals and energy, was reflected in PowerShares DB Commodity Index Tracking (DBC) which fell 12.6%. The falling stock market was good for iShares Barclays 20+ Year Treasury Bond (TLT) which rose 3.2% this quarter. Technology stocks continued to outperform the rest of the stock market as PowerShares Nasdaq 100 (QQQ) bucked the trend with a gain of 5.5% while iShares Russell 2000 Growth Index (IWO) lost (6.0%). PowerShares DWA Technical Leaders (PDP) rose 0.9% to finish in the middle of the pack.A move towards more defensive stocks pushed Health Care Select Sector SPDR (XLV) up 5.4%.

August was almost a mirror image of July with tensions between Russia and Ukraine easing. The result was a nice rebound for stocks in the US with a gain of 4.2%. Small Cap stocks lead the way with a bounce of 5.0% which almost made up for July’s (6.0%) fall. Long Treasury Bonds continued their surge with a gain of 4.1% for the month bringing their 2014 gains to 17.2%. Developed international markets were essentially flat for the month while Emerging Markets continued their strong rebound in 2014 with a gain of 2.3% for the month. The big winner in 2014 though continues to be REITs which picked up another 3.0% to bring their returns in 2014 to 21.3%.

August was a pretty quiet month for our Bond funds with PIMCO Foreign Bond (USD-Hedged) (PFODX) leading the way with a gain of 1.4%, followed by American Century High-Yield (ABHIX) with a gain of 1.1%. On the other side of the ledger, the worst bond fund was Ashmore Emerging Markets Corp Debt (ECDAX) which lost (1.1%).

The big winner in August was iShares MSCI Brazil Index (EWZ) which gained 10.7%, while iShares MSCI Switzerland Index (EWL) added only 2.5%. It was a strong month for a couple of sectors as SPDR S&P Biotech (XBI) gained 10.8% while SPDR S&P Homebuilders (XHB) climbed 7.1%. On the other hand, iShares Silver Trust (SLV) was our biggest loser as it fell (4.4%).

We have removed Mainstay Marketfield (MFLDX) from our Mutual Fund list because of under performance that may be the result of a significant increase in Assets since the fund started being marketed under the Mainstay banner.