You are here: Home » Archives for Market Updates

The long-awaited stock market correction finally came in August, with the S&P 500 declining (12.5%) from its recent high to its low point. It was the market’s first correction since 2011. This time around the blame fell on slowing growth in emerging market, and China in particular, the crash in commodity prices, and fears surrounding anticipation of the Federal Reserve’s first interest-rate hike. Stocks rebounded by the end of the quarter to cut the losses almost in half as the final tally was a fall of (7.3%). Small Cap Growth stocks took the biggest hit as the former high flyer dropped an unlucky (13.1%) while their Large Cap Growth brethren held on better than other domestic stock categories by falling only (5.3%).

The flight to quality in this risk-off environment pushed bonds up 1.2% which actually helped REITs as falling interest rates pushed them up 3.1% for the quarter. You could not hide by investing overseas as a (17.9%) drop in Emerging Market Equities was a drag on International stocks which fell (10.6%). Following the FED’s decision to hold interest rates steady, stocks headed south to test the August lows as the quarter came to a close. As I write the quarter’s update stocks have started off the 4th quarter with a strong upward move, so its possible they could finish the year in the plus column.

The 3rd Quarter of 2015 was a difficult across the board, but as often happens in volatile financial markets most Managed Futures funds did their job with AQR Managed Futures Strategy (AQMNX) leading all of our funds with a gain of 6.2%. This was followed by Credit Suisse Managed Futures Strategy (CSAAX) and AMG Managers Real Estate Securities (MRESX) which both gained 2.1%. Traditional bond funds performed well this quarter, with Fidelity Intermediate Government Income (FSTGX) being the best of our domestic bond funds with a 1.2% gain, while International Bond funds that hedge against a rising US dollar were also able to provide positive returns as PIMCO Foreign Bond (USD-Hedged) (PFODX) picked up 1.7%.

This was one of those quarters that we will be highlighting stock funds that lost the least. On the home front the larger the better as Parnassus Core Equity (PRBLX) lost (4.4%), Parnassus Mid-Cap (PARMX) fell (5.4%), and Hodges Small Cap (HDPSX) dropped (8.6%). Overseas funds were not any better as FMI International (FMIJX) which lost (7.0%) and Wasatch International Opportunities (WAIOX) which declined (6.1%) would be considered good performers.

As might be expected given the difficult financial markets this quarter, iShares Barclays 20+ Year Treas Bond (TLT) topped our list of ETFs with a gain of 7.8%, while iShares Core Total US Bond Market ETF (AGG) added 1.7% and SPDR Barclays International Treasury Bond (BWX) tacked on 1.3%. Interestingly Utilities Select Sector SPDR (XLU) was the leading sector ETF with a 3.5% gain, followed by Credit Suisse Long/Short Equity ETN (CSLS) with a rise of 1.8% and iShares FTSE NAREIT Real Estate 50 (FTY) which added 1.5%.

Volatility kicked up a notch in the second quarter of 2015 thanks to concerns about the economy of China, and possible defaults in Greece and Puerto Rico. The result was not good news for stocks or bonds. June’s losses essentially wiped out gains earlier in the quarter in the stock market which finished slightly above the flat line with a gain of 0.1%. The expectation that the FED will finally raise interest rates this year took bonds down (1.7%) for the quarter. Rising rates were also a significant factor in the big loss for Real Estate in the form of REITS which fell (10.0%) over the last three months. Aided by a falling US Dollar, oil rebounded for major gains and international stocks and bonds held on to positive returns this quarter. Small Cap growth stocks added 2.0% this quarter while Mid Cap value stocks went in the opposite direction falling (2.0%) over the last three months. 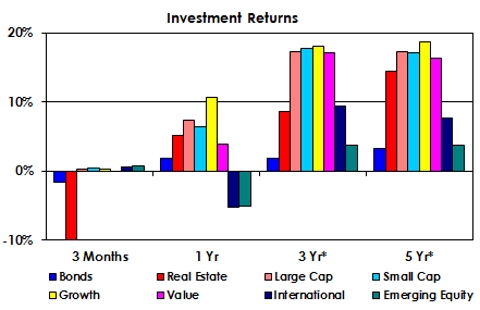 Investment Returns as of June 2015

It was an unusual quarter for financial markets as the uncertainty did not result in the typical flight to quality. Instead interest rates rose, which caused a fall of (9.6%) by iShares Barclays 20+ Year Treasury Bond (TLT). While rising rates often help the US dollar, you could not tell that from PowerShares DB US Dollar Index Bullish (UUP), which fell (3.4%). Smaller continued to be better as iShares Russell Microcap Index (IWC) picked up 3.1% while Large Cap ETF PowerShares Nasdaq 100 (QQQ) gained 1.6%. Given those two returns it is surprising that SPDR S&P MidCap 400 (MDY) actually lost (1.1%).

iShares MSCI Brazil Index (EWZ) turned out to be our best performing country ETF with a gain of 6.4% while iShares MSCI Malaysia Index (EWM) was the one to avoid as it lost (7.7%). Commodities turned up in June with PowerShares DB Agriculture (DBA) picking up 5.5% while SPDR S&P Biotech (XBI) was the top sector with a gain of 12.0%. On the other end of the spectrum, iShares FTSE NAREIT Real Estate 50 (FTY) lost (9.7%).

The fall in the US Dollar hurt international funds that are hedging against the dollar like PIMCO Foreign Bond (USD-Hedged) (PFODX) which lost (4.1%). On the other hand, that help unhedged funds like Fidelity New Markets Income (FNMIX) which picked up 1.5%. Some of our better domestic equity mutual funds were Rice Hall James Small Cap (RHJMX) which added 3.9%, Fidelity Low-Priced Stock (FLPSX) which gained 2.5% and Fidelity Focused Stock (FTQGX) which returned 0.1%. The falling dollar was good news for investors in

In many ways, the first quarter of 2015 looked a lot like the last quarter of 2014. Oil prices continued to fall and the US dollar continued to rise. While the direction of both trends continued, the strength of the moves showed signs of slowing down. While the overall market gained 1.8%, size and style mattered this quarter. Small Cap Growth stocks picked up 6.6% while Large Cap value actually lost (0.7%). Quantitative easing by European central banks helped International Stocks pick up 3.5% in spite of the fact that the rising dollar provided a strong headwind. Bonds continue to perform well, even as investors speculate on when the US Fed is going to start raising interest rates. 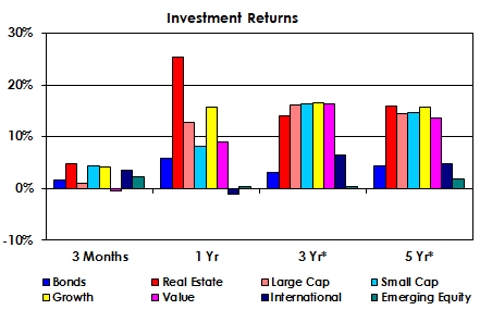 Investment Returns as of March 2015

Our best performing bond funds were the two International Bond funds that hedge against the US dollar as both Payden Global Fixed Income (PYGFX) and PIMCO Foreign Bond (USD-Hedged) (PFODX) gained 2.5%. SEIX Floating Rate High Income (SAMBX) was not far behind with a 2.4% return, while Fidelity Total Bond (FTBFX) picked up 1.9%.

It was a good quarter for most stock funds, in spite of a difficult March for many. Some of our best performers were Fidelity Focused Stock (FTQGX) with a 4.8% return, Scout Mid Cap (UMBMX) with a 6.0% gain, and Rice Hall James Micro Cap (RHJSX) which added 6.6%. FMI International (FMIJX) was our best Non-US fund with a 7.9% return, while AMG Managers Real Estate Securities (MRESX) was our top sector fund with a 6.7% gain. Our best performer was Credit Suisse Managed Futures Strategy (CSAAX) which added 10.9% in the first three months of 2015.

Our top sector ETF in the first quarter was SPDR S&P Biotech (XBI) which picked up 21.1%, while PowerShares DB Agriculture (DBA) (11.1%) as commodities continued to lose ground. PowerShares DB US Dollar Index Bullish (UUP) was up 8.1% this quarter. That does not sound like a lot compared to some of the real big movers, but for the US Dollar that’s quite a significant move. That’s quite a headwind for investors looking for returns outside of the United States.